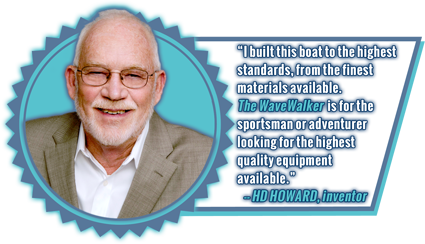 Historically speaking, when two brothers share a passion for cycling, engineering and inventing, the results have transformed the world in which we live. And while it would be hard to equal the accomplishments of the Wright brothers, Harry and John Howard have made an impressive mark on the world of cycling.

World famous US cyclist John Howard and his teammate, engineer and brother Harry Howard, have expounded upon their expertise and experience to advance the fields of relaxation and water cycling. The results of their efforts are the WaveWalker® line of boats and the Patented HydroGlide Drive system.

In 2000, the brothers’ passion and persistence paid off when John set a World Land Record for pedaling just under 105 miles in 24 hours on the prototype for the HydroGlide Drive unit, which now powers the WaveWalker® line of recreational pedal powered watercraft. The team has since perfected the highest quality watercraft in the world as a result of their combined efforts, in the dogged spirit of the Wrights, with Harry’s engineering genius complimenting John’s strength as an athlete and vice-versa.

Now acting as WaveWalker®'s principal, Harry Howard invented and patented the HydroGlide Drive unit, and has advanced the design of WaveWalker®’s Excursion model to include the new WaveWalker® Performance model. Using Sea Eagle’s line of inflatable hulls and a custom-designed recumbent cycling framework, the new Performance model is able to reach speeds of approximately 8 mph, making it the fastest pedal-powered watercraft in the world.

Harry Howard’s love for simple design and quality manufacturing is equalled by his passion for music and classic English sports cars. His undying love for the water and for cycling drives him to strive for excellence in both engineering the WaveWalker® boat series - and in enjoying his life. That passion is proudly birthed in WaveWalker® Boats, for your enjoyment.